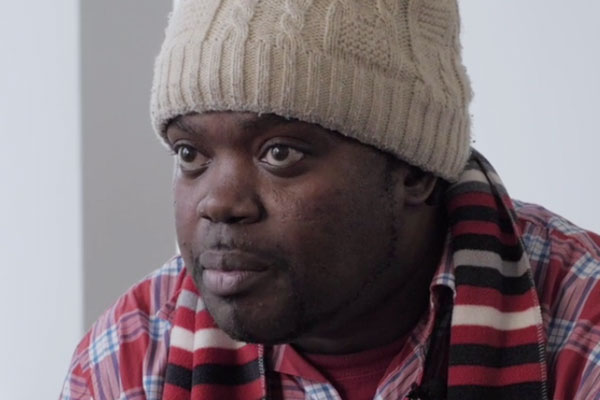 Glenn Baker is a 44-year-old Chicago native who currently works doing food prep for a catering company. He has a very calm demeanor, tends to keep to himself and is even self-described as anti-social. However, Baker’s magnetic personality emerged when he visited the AIDS Foundation of Chicago offices early this year to share his story.

Baker grew up in Chicago’s west side neighborhood, Pilsen, and lived in his grandmother’s apartment with his mom, brothers and sisters. This crowded bunch lived together until Baker’s grandmother passed away and a dispute with the apartment’s management led to the family receiving an eviction notice. They were all forced to separate in search of housing, but a lack of support left Baker to fend for himself. He made multiple attempts to reach out to family members, but they all ended the same.

“[My family] didn’t [allow] me to stay as long as I wanted to. I was staying with my auntie for a while … [but] me and her had an altercation, which led up to her placing me back out into the street. So, I walked the streets at night.”

Baker spent years in search of relief from the daily struggles he faced living on the streets, while also managing the effects that the harsh Chicago winters had on his battle with asthma. He would often work odd jobs to make a few dollars or work to have a place to sleep at night. Eventually, Baker got creative and took advantage of his severe asthma to purposefully admit himself into emergency rooms throughout the city.

“I would play the same sickness, illness with my asthma … just so I could have a warm place to stay that night or [get] admitted in a hospital where they would keep me for maybe a week, or two or three days.”

Although unconventional, this method allowed Baker to access to a safe place to sleep and have a regular check-up on his asthma. Upon one of his many monthly visits to the ER, Baker’s luck took a turn for the better when he met a case manager at the hospital. As he recalls, “She told me about the [program] that was being launched and that they were trying something new.”

This new programming was a strategy implemented at the University of Illinois Hospital & Health Sciences System through a partnership with the Center for Housing and Health (a supporting organization of the AIDS Foundation of Chicago). This strategy emerges from the “housing first” model and allows hospitals to identify patients who are both chronically homeless and frequent visitors of emergency rooms to be moved into permanent housing with no strings attached.

The goal of this strategy is to achieve better health outcomes that are linked with reductions of unnecessary ER and inpatient hospital use. In turn, medical expenses for hospitals go down, primary care use increases and patients’ health improves. Baker was one of the first of 25 clients that this new program took on in Chicago, and it has already proven to be effective.

Baker moved to his new home in the Auburn Gresham neighborhood on June 1, 2016 with support from North Side Housing. He says that he used to visit the ER up to 5 times a month, but has now reduced that to less than five times a year. With this new apartment, Baker is able to better manage his health and eliminate the stress of finding a place to sleep at night. When he first moved in, he recalls being overwhelmed with emotion:

“I went and took a nice long shower and then just sat around and just prayed because I couldn’t believe it. I went back and forth between the rooms. I was astonished that this was mine, and these were my keys!”

Baker loves sharing his story with others, and wants everyone to know about the success he has had in order to encourage others to find the support they need.

“One of the things is that if [you]’re looking for support, looking to try to get some help,… they are willing to help others. There are programs that can help place you. I just want people to [not] give up hope for things getting better … That’s one of the one things that I want people to know about this program; it’s a great stepping stone.”